The race started with a heavy snowing and continued in unpleasant rain. Such ugly weather followed Women Sprint Race of the 3rd World Cup Round in Nové Město na Moravě. The victory was taken by Marte Olsbu Røiseland of Norway after a clean shooting record. It was her premiere win in the World Cup! Second was Laura Dahlmeier of Germany, who competed in her first World Cup race this season and after a long struggle with health issues and slower season start in IBU Cup clearly proved a great shape. Already the third time on the podium, that is a great season start for Paulina Fialkova of Slovakia who finished 3rd and managed not to miss a single of the 10 targets.

How did the Czech girls do?

Veronika Vítková had a clean shooting, but in the end of the race was lacking more powers. She had only the 44th best running which meant 19th position in the finish line. A good race it was for Lucie Charvátová who achieved to earn some World Cup points after more than 2 years with her 29th standings. She missed only 1 target in each shooting and had 24th running time. Eva Puskarčíková managed to sneak into the Saturday’s Pursuit, too, while finishing 48th. Unfortunately the race didn’t go well for Markéta Davidová who missed 4 targets and in front of 22 thousand spectators ranked 67th, 13 seconds behind the 60th position which is the last one to proceed to the Pursuit.

The race was a big disappointment for the Finnish favorite Kaisa Mäkäräinen who missed 5 shots and ranked 58th. On the other hand a very good result was achieved by Polish Kinga Zbylut, who finished 8th. Her best career rank so far was 39th from Sprint in Östersund 2015 so with her performance today she became the comet of the race! 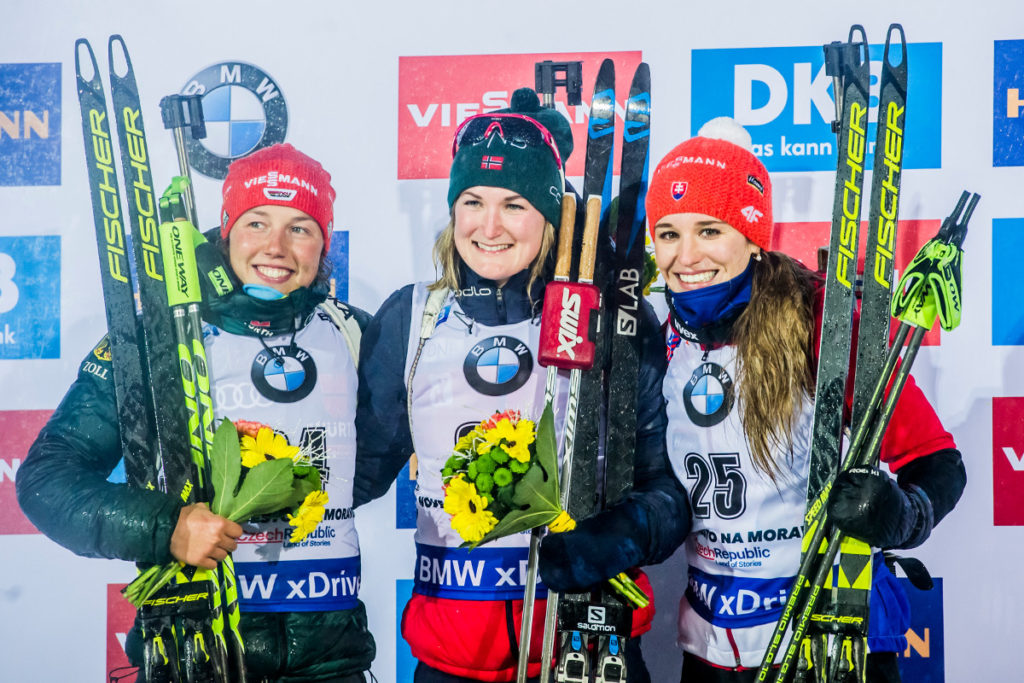 COMMENTS OF THE WINNERS

„It is like a dream. I really wanted to win and I’m extremely happy that it happened so close before Christmas. It is hard to compare this victory with the Olympic medal. That was in last season, now I look forward and want to enjoy my first WC victory as much as possible. I was very nervous watching Laura on the standing and then struggling in the last loop. I know very well how fast she can be. Now I want to enjoy this evening and we’ll see what’s ahead of us tomorrow.”

„Today is a very special day for me, because my preparation period this year was extremely difficult. I was injured and couldn’t train for two months. In the end of September I spent some time in the hospital and couldn’t do pretty much nothing. Now I sit here and I’m back on the podium, which is very emotional. I really love Nové Město, I had my international debut here back in 2011, then experienced the first World Championships and also my premiere win. There are thousands of fans around, everyone being very friendly. It is a great biathlon venue!“

„For me it was pretty hard to remain mentally focused for this race. But before the season start I spent some time in Lenzerheide with similar conditions, so I was well prepared. I also felt some pressure from our Slovak fans, but I said to myself that there has to be just me, my rifle and 10 targets. And it worked! Actually I was quite surprised how well it all went and how simply I managed to shoot clean. In the last loop I met my sister on the course, I wanted to catch her and tell her something. Tomorrow I want to do a good race and focus on shooting. It will probably be windy, but never mind. It will be fun!“

„On the course it wasn’t very good, but definitely much better than in the beginning of the season. The fans also helped me to ignite my engine, there were so many of them! I am happy for the clean shooting, we changed a few minor things with our new coach Egil, especially in my shooting position. I think that these changes now work well. Since then I keep on shooting better and it feels more natural. Mass Start Race? Well, yes, it is now closer, but I still need to do a good race tomorrow in the Pursuit to sneak into it. On the other hand my position for the Pursuit is good, so I will do my best to shoot well. That is always crucial in the race with 4 shooting stops!“