30.000 brave fans followed on Saturday in the Vysočina Arena fantastically dramatic Pursuit races. They saw a duel of two Norwegian brothers, Johannes and Tarjei Bø with a Russian Alexander Loginov or a beautiful drama all the way until the finish line between Marte Olsbu Røiseland of Norway, Italian Dorothea Wierer and Swedish Hanna Öberg.

Czech athletes did not squeeze into the winning fights, which were accompanied by strong wind gusts and also a heavy rain in case of the Women’s race. The best among the home squad was Ondřej Moravec who finished on 18th, even though he was chased by an uncomfortable stomach ache. Michal Krčmář finished 32nd and Jakub Štvrtecký 49th. In the Women’s category Lucie Charvátová finished the race on 34th and Eva Puskarčíková was classified as 50th. Unfortunately the health issues didn’t let the Czech leader Veronika Vítková to finish the race, she was also pursued by a stomach ache. 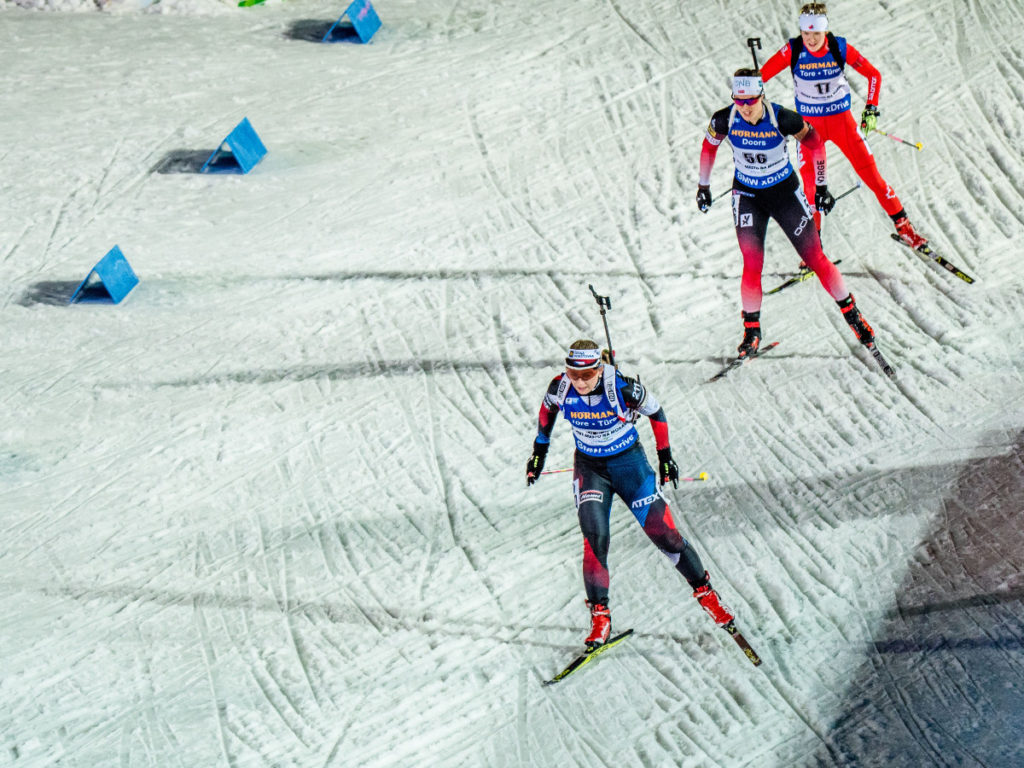 What happened to the Czech team? Explanation comes from the doctor of the team, M. D. Vladimír Dobeš:

„Ondřej Moravec had some cramps in the stomach and also a diarrhea after finishing the race. But now he feels better. Veronika Vítková felt pretty much the same, but on the top of that she also had to vomit. Unfortunately, we can’t tell what is the reason, whether food, water, exhaustion or even something else. Both athletes took some medicine to get the stomach and gastric ache under control. I consider important that they both don’t suffer from fever. We will do our best to help Ondřej and Veronika back to the shape as fast as possible. Hopefully we will be able to help Ondřej to stand on the start line on Sunday.“ 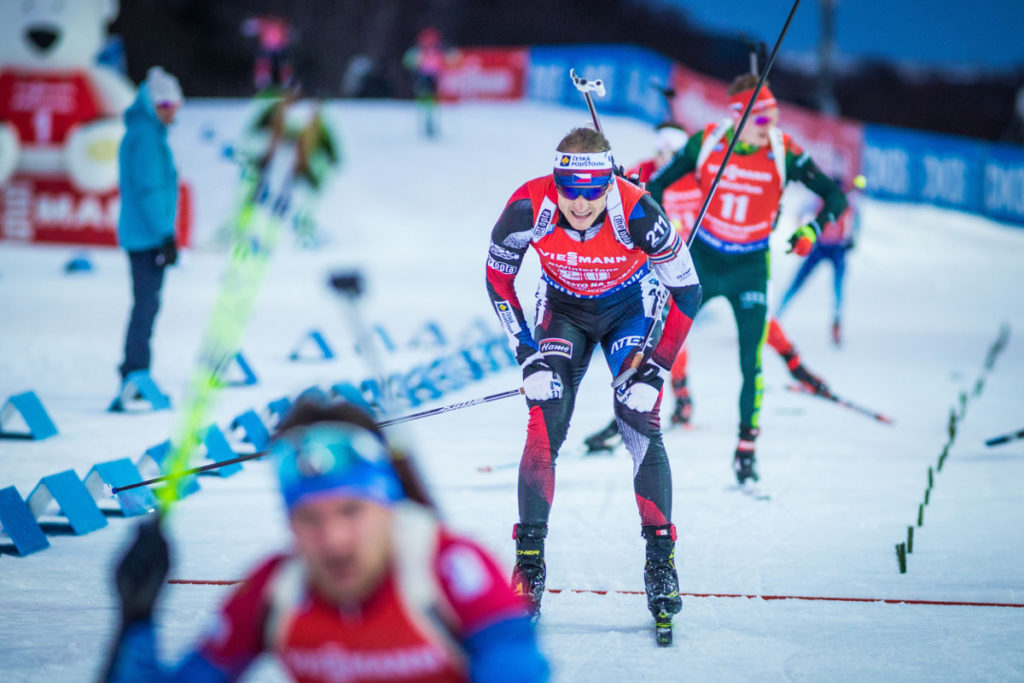 COMMENTS OF THE WINNERS: MEN

„This was an extremely difficult race, mainly because of the changing wind. After the first prone I had to adjust the sights and then shot clean. Standings were really demanding, I was trying to do all I could. But it was enough, even though it was tight. My aim was to hit 17 or 18 targets. In the end I did not to manage that, but in such conditions even 16 was sufficient. For tomorrow I will have another chance to improve. I will try to focus one more day on biathlon instead of the Christmas. It will be a nice holiday season in the yellow jersey and my goal for the rest of the season is to defend it.“

„I really value this result and rank it high, especially because of the tricky conditions we had. Shooting was not easy, but I managed to do quite well and fast. I knew I had to shoot a bit risky and I also held on that plan.“

„I started 1 minute behind my little brother, so I didn’t even think about the victory. But all of a sudden we were there together, fighting for the win almost to the very end. So in the end I’m really satisfied with my race today, even though the win was very close and I didn’t drag the mission to the very top. But it is important that the victory remains in the family, although I hope that it will be my turn sometime soon (laughing). Johannes is now better than ever before, I think that he is currently the best biathlete in the world. Now we’ll have a 2 weeks rest so let’s see how it will be then, it can all change fast.“

„I only managed to finish the race because of the willpower. I had cramps and stomach ache and the fourth and fifth loops were a real struggle. I proceeded into the Mass Start race on Sunday but I don’t even know if I’ll be able to compete.” 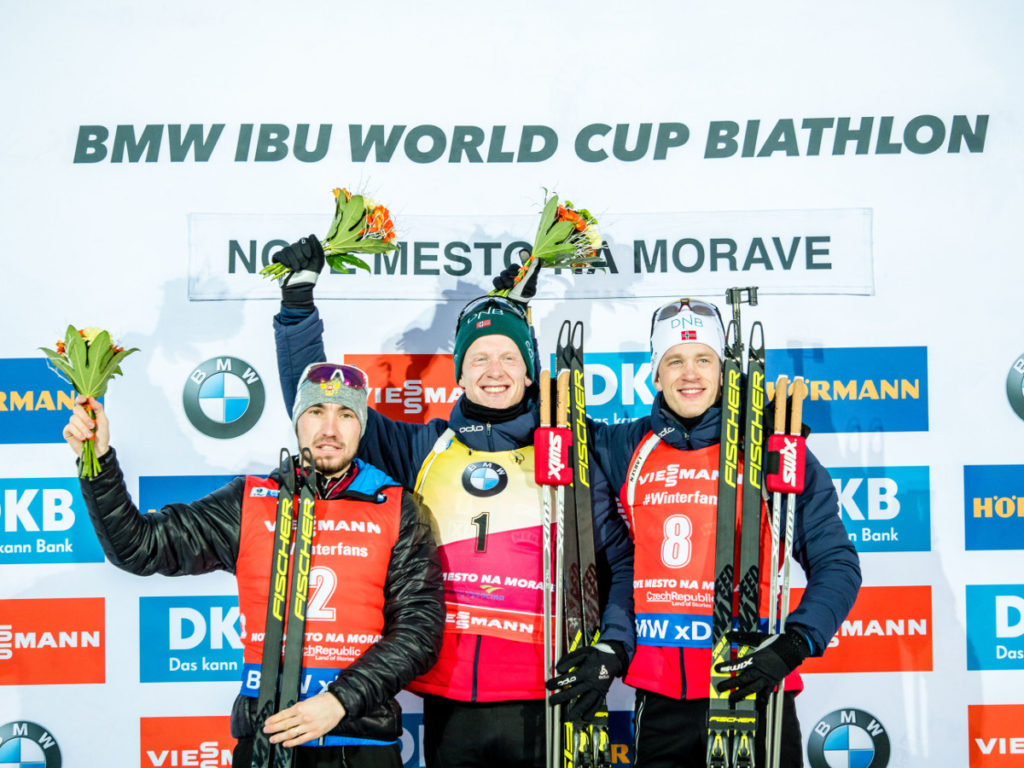 COMMENTS OF THE WINNERS: WOMEN

„This is an incredible feeling. I was a bit nervous on the start but then I tried to focus only on myself and my work. I had great skis today as well as yesterday, so thanks to our service team for that. Now I’m travelling back to my husband and I can’t wait to enjoy some rest and the Christmas. I‘m really looking forward to it.“

„On the last standing there was a strong gust. I missed the first target and said to myself that it will be better to make a little break to avoid more penalty loops. I lost some time but I am very satisfied with the race after all. The duel on the finish line was tight and attractive. In general I feel very strong last days and we also have great material and skis. Now I will travel home and enjoy some rest. Then there will bet the exhibiton race on Schalke…“

„Last days I felt pretty strong and in a good shape so I knew that a good result will come sooner or later. I made a good improvement in my skiing. Of course that I’m happy for the podium. Today it was really windy and it was hard to hit the targets. On the last standing I got pretty nervous but managed to handle it. The whole race was really good. Of course that I was trying to catch Marte and Doro but in the last uphill I understood that there is no chance any more…“

„I am really satisfied because the race on Friday helped to get into a better mood. And I also value that I didn’t flunk today. When I look back to the start of the season, these 2 races are high above my average, so I believe that my performance and shape gets better and that I managed to adapt to our new training system well. I feel better with my skiing, even though this race was long and last loops I already felt tired. And it also reflected in my standings. I couldn’t even stand still… But I have to say that I feel fit and sound, even though the rest of the team is down. Now it is not difficult to catch something. We’ve been together for quite a while, we are more and more tired and therefore the immunity is weaker. My immunity is usually quite good so I’m glad I remained healthy. Hopefully it will last for Christmas, too.“